Danggit from Samar for brunch, thanks to Apple :) While watching P.Noy's inauguration. Sarap, hindi masyadong maalat. :9 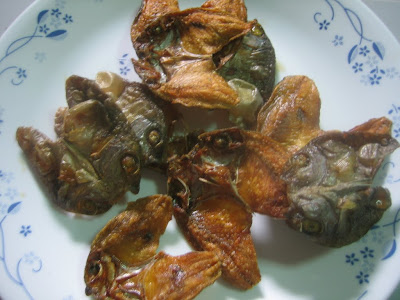 Other than for just baking, baking soda has much, much more other uses! It's a very effective cleaner and deodorizer! "The power of baking soda comes in a one-two punch: It helps regulate pH, which keeps a substance neither too acidic nor too alkaline. It also has the capacity to neutralize to retard further changes in the pH balance, known as buffering."

I like most its 'freshen sponges' function, which I have yet to try though: "To eliminate foul smell from sponges, soak them in 4 tablespoons of baking soda dissolved in a quart of warm water. Soak them overnight for a more thorough disinfecting."

Main reference and source of quoted text is today's Philippine Daily Inquirer article by Kenneth M. del Rosario, "Baking soda is home's best buddy: Best ways to use this all-in-one product for your household chores" :) I couldn't find an online link to the article so better get yourself a copy of today's Inquirer. It's on page M2, as part of the paper's Special Advertising Feature on Home Improvement. For those who can't get a copy, the article's source is the Yahoo! Green Blog. Link to Melissa Breyer's entry "40 fantastic uses for baking soda" here.

P.S. Another reference is the Arm & Hammer website.
Posted by Mara at 11:49 PM No comments:

pineapple moves to a new home

We transferred it to a bigger pot. :) 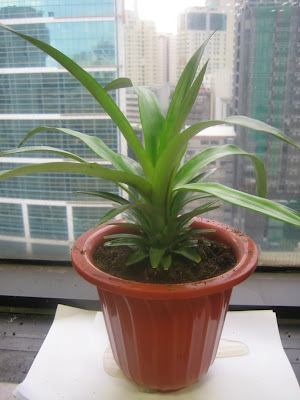 more room for its roots to stretch 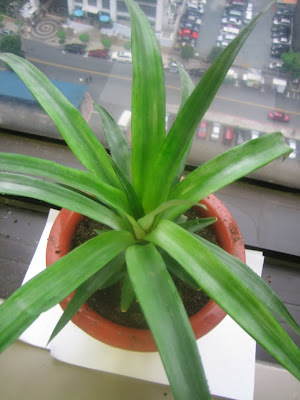 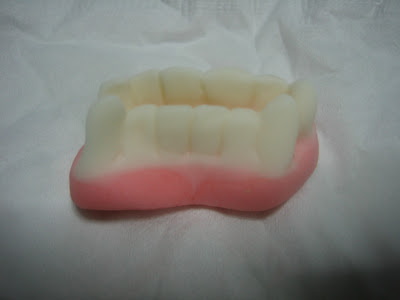 say cheese!
Took this home (a.k.a. stole this) from the Spiral lunch buffet. :) Wonderful lunch with the Aquinos earlier today.

Advanced Happy Birthday, Tita Moje!
Posted by Mara at 7:43 AM No comments: 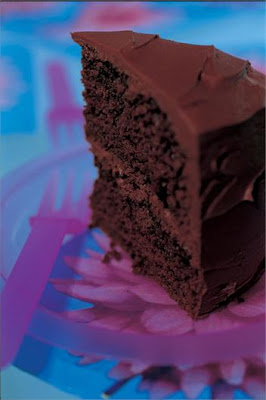 photo by Francesca Yorke (from www.nigella.com)
http://www.nigella.com/recipe/recipe_detail.aspx?rid=250
Posted by Mara at 5:28 AM No comments:

"Success need not be measured in terms of wealth, power, or fame. Success after all is a 'state of mind' resulting from self-satisfaction that you enjoy what you do, that you know without any doubt you are good in what you do, and despite that you still want to get better and do even better."
Posted by Mara at 10:23 AM No comments: 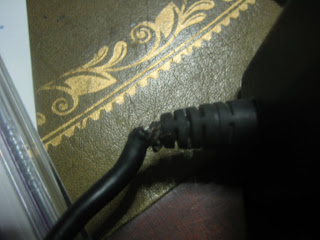 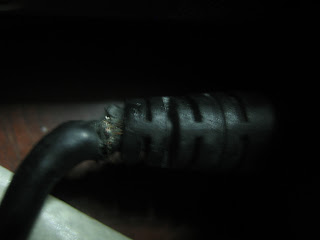 up-close
Do they sell stand-alone laptop adaptors in computer shops?
Posted by Mara at 9:28 AM 1 comment: 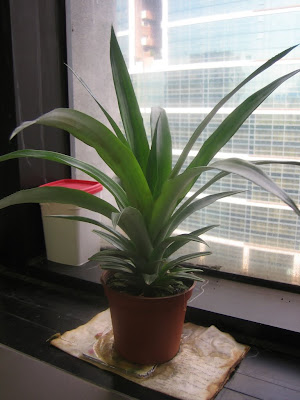 Rachelle removed the "weeds" na. Doesn't it look cleaner?
Posted by Mara at 11:59 AM 1 comment:

pineapple after the long weekend 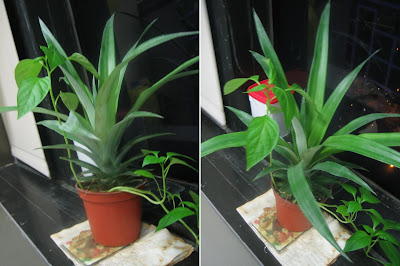 Sixteen month-late blog post! :D
Day before Valentine's in 2009, after work, Ronjie and I had dinner at Talking Tongues, along San Agustin Street in Salcedo Village, Makati. The place was very near his then-office. I think it had just opened then, so we decided to check it out. That evening, around 9:00pm, we were the only customers in there, the seats were comfortable, the music was relaxing (actually, I don't remember na how the music was like then, hehe), and the lighting was warm... perfect ambience for a cozy dinner with your beloved.
They serve Chinese-Indonesian food... which tasted good! :9 The interiors were interesting, too. My rating scale for the things I blog about are: Try it, Don't waste your time (and money) on it, or Only try it if you're not paying. Talking Tongues is definitely a Try it! :) Some photos from my phone camera: 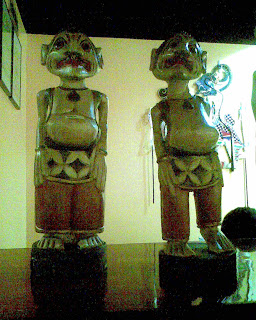 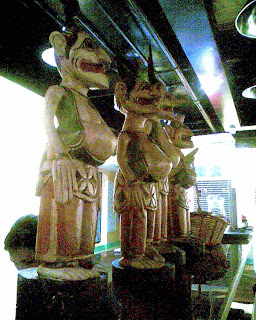 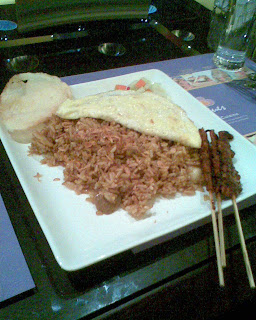 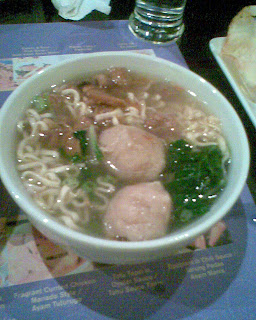 noodle soup is my comfort food! 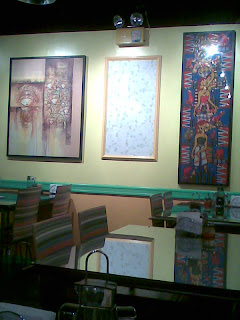 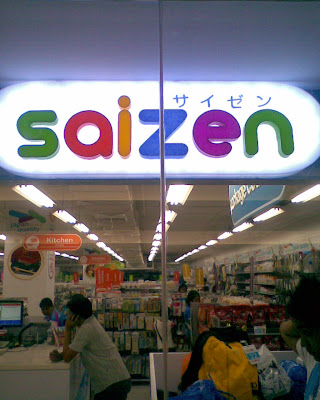 Was in Ali Mall earlier today; I discovered a new store! Saizen! Where everything is sold for P85. The 85-peso store! Merchandise is from Japan; they have some interesting items...
black cotton buds 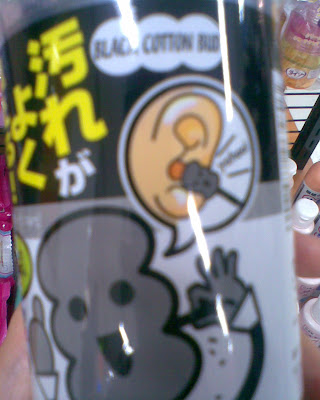 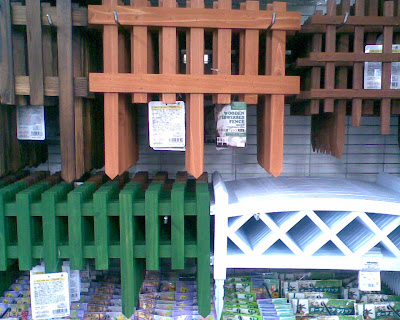 I shall return! Saizen is located at the lower ground floor of (The New) Ali Mall. 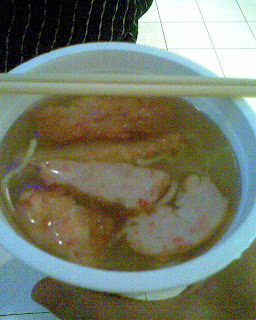 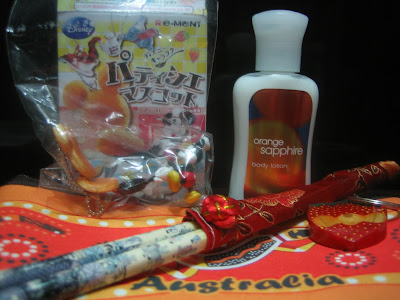 I love receiving pasalubongs! Here's what I collected the past 2 weeks. :D

Clockwise, from bottom:
- bright-colored pouch with aboriginal art design from Van's Australia vacation;
- blue-and-white chopsticks from Chris who joined a conference in HK/Macau;
- Mickey Mouse with pancakes cellphone charm/keychain from my Nihongo teacher's Japan trip (I like that the Japanese also have a culture of giving pasalubongs whenever they return from trips);
- lotion from Jill who's based in Singapore but was in Manila for a weekend; and
- wooden strawberry keychain from Marilyn who came from a Baguio trip with officemates
Posted by Mara at 8:51 AM No comments: 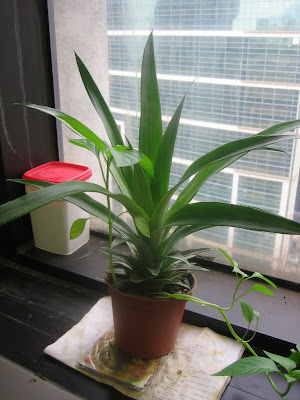 Rachelle's pineapple plant is getting bigger! And the foreign plants squatting in its pot are growing too! (Tinapon na si Sir Rico yung pineapple plant niya kasi kawawa na yung itsura.) I wonder how much longer before the fruit starts to form.
Posted by Mara at 11:26 AM 1 comment:

Dinner with college friends last Saturday, to celebrate our '10 years of knowing each other'. We tried the Oakroom in Oakwood Ortigas; this was dinner for me: 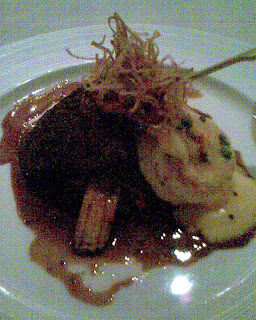 beef and a prawn

It was fine, not great though. Or maybe I didn't really enjoy kasi was busy thinking about Ronjie's pork sinigang which I wish I was having instead that night.

Monday night in Cafea, along Sgt. Esguerra Ave. My first time in there. I was so happy when I entered and saw the red carnations! I thought to myself, "Wow! This place invests on having fresh carnations! I think I will come here more often, if only for the fresh flowers!" But then, disappointment. As I got closer, I learned they were plastic carnations. *Sigh.* Oh well. And another disappointment followed: missing the Cafea Chops (porkchops stuffed with apples and other things) because I was 1 order late. Wenna and Arn, who ordered just a few minutes before me, got the last piece. :( They shared a bite with me naman, but still. Well, now I have 1 reason to go back. Another reason would be to try their coffee. :D 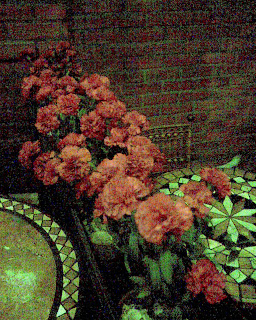 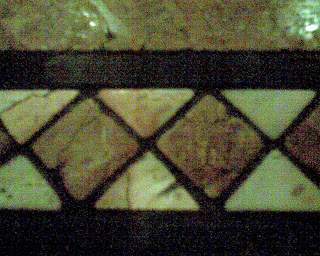 Labels: eat
Newer Posts Older Posts Home
Subscribe to: Posts (Atom)
If you're having problems with carbonaramara.com, please visit the original blog site at carbonaramara.blogspot.com. Thanks!