Lazy Saturday again. Aahhh... :) I spent time in the kitchen earlier today. I cubed some canned almond jelly for our lychee and almond jelly dessert. What do you think? 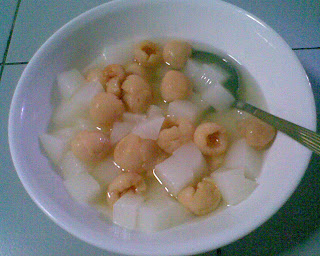 Uni-Mart in Greenhills lang yung nagbebenta ng canned almond jelly. (Got this tip from Atty. Anne, my former employer's in-house legal counsel.) You can find it the the section where the canned green jelly is sold. Otherwise, you can make some from scratch, using powdered almond jelly. Using canned saves you time though. While chopping, naalala ko bigla yung 'Ploning' (local movie starring Judy Ann Santos)... In 'Ploning', lychees were served only during special occasions... Nothing special naman about today, except maybe that I finally finished my 2009 goals/checklist. Nine for 2009. Mostly travel plans. :D Sharing:
1. Batanes. Parang Europe daw ang Batanes. Sana mag-sale na ulit ang Zest Airways.
2. Dumaguete-Siquijor. I'm booked already for Jan.30-Feb.1! Yay! Going with OH Mel. I'm thankful she's kaladkarin. We're travelling together again after 9 years, when we visited Iloilo and Guimaras in 2000. (Haha! Diarrhea memories of the Iloilo-Manila boat trip are starting to come back to me.) Asenso na kami ngayon kasi via plane na kami to Dumaguete. Dumaguete-Siquijor, anyone? You're welcome to join us. Puntahan natin yung witchcraft village sa Siquijor. :D
3. FreeCell 20,000. 'Finish all 1 million FreeCell games' is on my bucket list. I just finished game 722. According to my calculations, I have to finish around 18,500 games per year if I want to reach the 1 million mark by age 80. Let's see how far I'll be na by year-end.
4. Graduate school. Start on my MBA na, while a part of me still wants to study.
5. Learn how to cook adobo.
6. One hundred ten pounds!
7. Run a marathon. Nicole's tito is organizing a marathon for Tubbataha for March 22. I'm just waiting for the final details from Nicole. The shortest option is a 3k run, that's what I'm running. :D Taralets!
8. Save more.
9. Taipei. Maybe in July or August. Birthday gift to myself. I'm trying to get to know Asia, one country at a time. :)
Posted by Mara at 4:10 AM