not smiling at DHL and the Bureau of Customs

Last Monday, July 19, I arrived home and saw a DHL invoice with an attached Amazon Japan invoice waiting for me. (See Exhibits A & B.) Apparently, someone sent me a package from Amazon Japan, but before DHL gives it to me, I need to pay them Php1,570.60 - reimbursement of charges. Per Amazon invoice, the cost of the books being delivered was just JPY1,567 (~Php800). So, I had to pay twice the cost of the books (sent to me as a gift) to receive them. Parang hindi yata tama ito.

Exhibit A. DHL invoice waiting for me when I got home last July 19 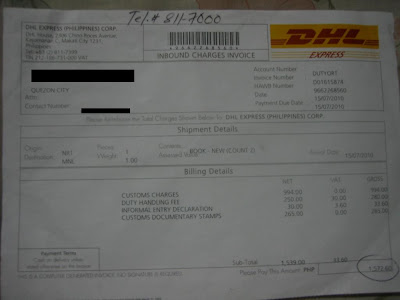 Exhibit B. Amazon invoice attached to the DHL invoice left by the DHL delivery guy 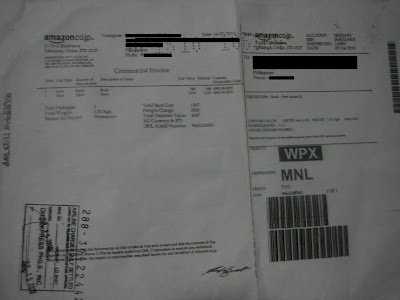 Since Ronjie was the only person I thought of who could be sending me packages from Amazon Japan, I called him to confirm. The books were gifts, a surprise. Aww... :) Na-surprise nga kaming dalawa, sa kailangang bayaran pa. Prior to this, when I received parcels from abroad, I would just receive a notice from the Quezon City Post Office informing me of a package for pick up from their office. Parcels would be held there until the recipient arrives to pay any necessary customs charges before they release it. I have experienced receiving books, magazines, and CDs, which I had to pick up in the QC Post Office along Agham Road and, each time, all I had to pay was a minimal Php35. Thus the surprise when for this package from Amazon Japan, I had to pay so much.

July 21 - I receive an e-mail from Rose, with the breakdown and computation of the charges. (See Exhibit C.) I only get to review it and respond to her e-mail that night. I asked about the brokerage fee, documentary stamps, import processing fee, and duty handling fee. I also point out and contest the amount used for freight (USD55, when per the Amazon invoice, freight was only JPY2,500, or roughly USD29). Sinasama na pala ang shipping costs sa amount to be taxed?! Wow. Kakaiba 'tong Bureau of Customs ng Pilipinas!

Exhibit C. Printed copy of the e-mailed computation of the breakdown of charges 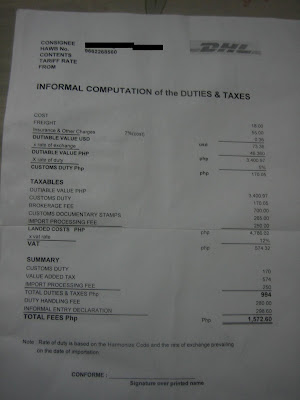 Rose calls me the next morning, she received my e-mail reply. Brokerage fee, documentary stamps, import processing fee (what the?!) and duty handling fee are fixed costs. I question the freight cost used, USD55 daw ang minimum na ginagamit for packages from the United States, per IATA something. Nagkamali pa nga yung BOC kasi yung US rate yung nagamit when for parcels from Japan, the rate is USD83. I am already angry by then. Grrrr! In the first place, the package is of books, which aren't supposed to be taxed. (I read that somewhere.) Second, cost of the books is USD18, at kahit isama ang shipping costs (USD29), total would be just USD47, which is below USD50! Aren't parcels under USD50 exempt from tax?! I remember reading that somewhere, too. Third, kung isasama nga ang freight sa computation of taxes and duties, why use USD55 when actual cost was just USD29?! Saan nakasulat na USD55 ang minimum na gagamitin?! To try to appease me, Rose says that she will try to have approved a discount/waiver on the total charges, based on freight of USD29. Using USD29 freight (instead of USD55) and keeping everything else constant, charges would go down to Php1,360.83.

I pretty much knew already that the discount/waiver would be approved because it would mean less loss for DHL (Php211.77 vs. P1,572.60 if I decided not to pay and just leave the package with them), considering that they had already paid the Bureau of Customs and that what they were collecting from me was for reimbursement of charges.

I get a call a couple of hours after and I'm informed that the waiver/discount has been approved. We agree that I will pay P1,360.83, that delivery will be scheduled for July 24, Saturday, so I'm home to receive the parcel, and that she will give me the Bureau of Customs receipt for P1,572.60 showing that DHL paid that amount to the BOC, as the DHL invoice says "Please Reimburse the Total Charges Shown Below To: DHL EXPRESS (PHILIPPINES) CORP." (emphasis mine) (See Exhibit A again.)

July 24 - The package arrives but the BOC receipt is only for the P994! (Exhibits D, E & F are the BOC documents/receipts I receive from the DHL delivery guy that day.) Haay. I pay the Php1,360.83 anyway and receive the package. With this, I am now assuming that Duty Handling Fee (Php250 + Php30 VAT) is a DHL fee (not something charged by the BOC which I have to reimburse to DHL). Dahil hindi naman nila ako binigyan ng choice to pay the BOC directly, they can now charge me for their handling of the customs duties/charges. Dito rin siguro nila binawas na lang yung Php211.77 na binigay nilang discount/waiver. Now, the informal entry declaration fee (Php30 + Php3.60 VAT) and customs documentary stamps (Php265) - what are those?! What are considered for a package delivery to be declared as informal entry? And what are the documentary stamps for? And while we're at it, isama na rin natin ang ibang fixed charges. Bureau of Customs, what is import processing fee (Php280, inclusive of VAT)?! And why is brokerage fee so high? DHL, is the Php700 brokerage fee a component of the JPY2,500 freight paid by the sender of the package? What is brokerage fee?

Exhibits D, E & F. Bureau of Customs receipt for the Php994 and an attachment to the receipt 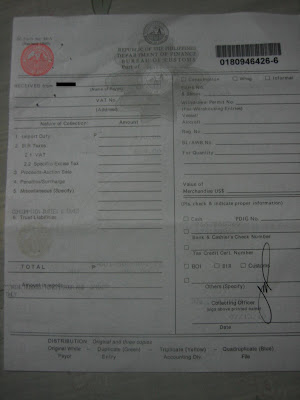 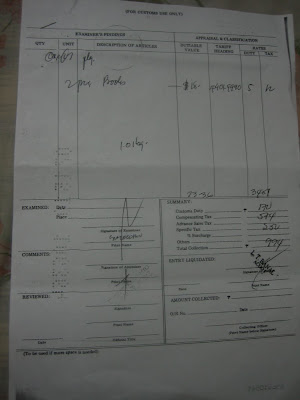 Goodness. Rate of duty is just 5% nga but everything gets inflated because of all those fixed charges and VAT. (What happened to books not being taxed?! I still feel bad for having paid the P1,360.83 I paid, kahit ba discounted yon. Discount-schmiscount!) Parang this is fraud already. Starting with the BOC, tapos ngayon, nakiki-ride pa ang DHL, taking advantage, to charge their customers Duty Handling Fees, and Informal Entry Declaration Fees and Customs Documentary Stamps. Haay. Grrrr!
I think this is my longest and most text-heavy blog post, to date. :D

P.S. I e-mailed DHL and the BOC my queries (and also to let them know my sentiments) with the hope that they enlighten me on all these. Will e-mail again and send them a link to this post. I hope I get some feedback. Readers, I will let you know. :)
Posted by Mara at 9:06 AM