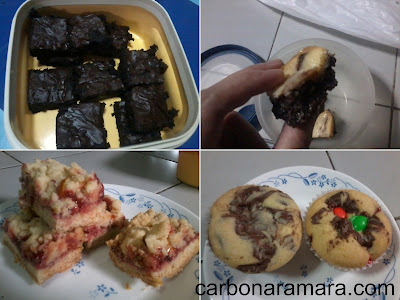 I missed baking. So this July, we've been baking at least once a week at home. :)

Started off with regular fudge brownies baked by my sister. Using White King instant brownie mix. Sarap! It was moist, soft & fudgy. :9 The week after, I tried making cheesecake brownies, but they ended up a failure. :( My fault actually, I didn't read the recipe beforehand. The brownie mix I got was only half the amount required in the recipe, and I still used the full amount of cheesecake topping mixture. They ended up too moist, with the brownie section not being cooked through. Taste-wise, masarap naman. :) I was luckier the following week when I made strawberry crumb bars (using a blueberry crumb bars recipe but substituting stuff). The strawberry crumb bars were good, though they probably would have tasted better if fresh strawberries were used. Lastly, I made Nutella cupcakes for my birthday. :) We didn't have enough Nutella though so half the batch just had half the amount of Nutella--and to augment this, I dropped in some peanut m&ms into the kulang-ng-Nutella cupcakes. I overbaked the cupcakes so they ended up dry. :( Lesson learned. Oh well. (Pero masarap pa rin naman sila ha. Can't go wrong with Nutella.)

I've been collecting recipes for next month's baking sessions. Excited to try them out already and post about them too. :)
Posted by Mara at 5:11 AM