Ronjie's Nihongo sensei gave out boxed goodies in class one day, to celebrate Tanabata. Looks like black bean jelly, which is symbolic for good health. 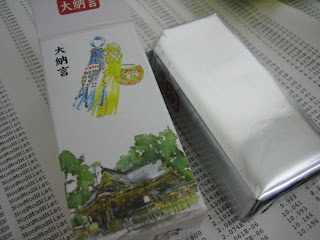 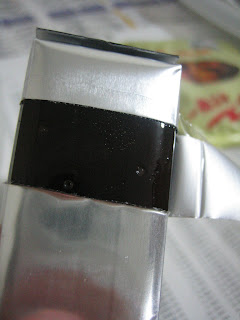 Tanabata (also known as the "star festival") is the "Japanese-Chinese Valentine's Day" and is celebrated on July 7 (or August 7 in some places, based on the traditional Japanese lunisolar calendar). According to a legend, this is the only day when lovers Vega (Orihime) and Altair (Hikoboshi) are allowed to meet. The lovers' story, lifted from Wikipedia:


Orihime (織姫 Weaving Princess), daughter of the Tentei (天帝 Sky King, or the universe itself), wove beautiful clothes by the bank of the Amanogawa (天の川 Milky Way, lit. "heavenly river"). Her father loved the cloth that she wove and so she worked very hard every day to weave it. However, Orihime was sad that because of her hard work she could never meet and fall in love with anyone. Concerned about his daughter, Tentei arranged for her to meet Hikoboshi (彦星 Cow Herder Star) (also referred to as Kengyuu (牽牛)) who lived and worked on the other side of the Amanogawa. When the two met, they fell instantly in love with each other and married shortly thereafter. However, once married, Orihime no longer would weave cloth for Tentei and Hikoboshi allowed his cows to stray all over Heaven. In anger, Tentei separated the two lovers across the Amanogawa and forbade them to meet. Orihime became despondent at the loss of her husband and asked her father to let them meet again. Tentei was moved by his daughter’s tears and allowed the two to meet on the 7th day of the 7th month if she worked hard and finished her weaving. The first time they tried to meet, however, they found that they could not cross the river because there was no bridge. Orihime cried so much that a flock of magpies came and promised to make a bridge with their wings so that she could cross the river. It is said that if it rains on Tanabata, the magpies cannot come and the two lovers must wait until another year to meet.

One of the customs is to write your wishes on a small piece of paper and then hang it on a bamboo tree, along with other decorations. The Tanabata festival is particularly famous in Sendai, where it is celebrated in August. Recently though, Japan has been cutting down its festivals--to conserve energy and probably also so resources can be redirected to the rehabilitation of those affected by the recent tsunami--so I wonder if the Tanabata festival will be celebrated in Sendai this year, and if so, in what scale. In any case, I hope it isn't rainy on the day.