My initial reaction when I learned of Steve Jobs' passing was of shock then sadness. Yes, we were all expecting it to be coming (after the news of his cancer, liver transplant, deteriorating health, and recent resignation as CEO of Apple a little over a month ago) but it was still surprising to find out that he was gone already. I first got the news from my Twitter timeline this morning, just right after my husband left for class. It's hard not to be affected by Steve's death and you can't not blog about it. Steve was a crazy guy, crazy enough to think he could change the world--and he did.

It was only recently that I started to get to know Steve Jobs more. Ronjie's a big Apple fan and the I-love-Apple vibes have been rubbing off on me. It's because of Ronjie that I can now blog about Steve Jobs (and Apple). Remembering Steve, here's my list of 5:

1. Thank you, Steve, for giving us the personal computer.

2. Apple products! Since May, I have been blogging from my husband's year-old MacBook Pro. I'm not a techie so I wouldn't really know the advantages of one computer over another, but I love the Mac because I don't have to worry about computer viruses! Ronjie's old original iMac (in bondi blue!) is in my parents' home in Manila and still works after all these years. The last time I used it was over a year ago and it was still fine, just really slow. Ronjie made me bring and use his iPhone 4 for a day when I had to go to Asaka alone (the place is 70 kilometers from Hon-Atsugi and wasn't as urbanized as Tokyo, i.e. not many English speakers I could ask help from in case I got lost). It's cool that the phone has amazing apps and that my husband could track me with it via GPS. The MacBook Air Ronjie brings with him is very sleek and super light! Our siblings in Manila have iPad 2s. It's so portable and I love that we can easily videochat using FaceTime. I've never used an iPod but how the iPod and iTunes have revolutionized the music industry is amazing.

4. I like Steve Jobs' house. Check it out. Yup, I'll remember Steve Jobs for his cool house.

5. We'll all remember Steve Jobs because he was a visionary. He really was a crazy one. And he inspired people--us--to pursue their--our--dreams. From his Stanford speech:

You are already naked. There is no reason not to follow your heart... Your time is limited, so don't waste it living someone else's life. Don't be trapped by dogma, which is living with the results of other people's thinking. Don't let the noise of others' opinions drown out your own inner voice. And most important, have the courage to follow your heart and intuition. They somehow already know what you truly want to become. Everything else is secondary.

The guy is an inspiration. Steve really LIVED his life. Even during the "low" points of his career and in the past few years as he dealt with his sickness, he still kept on going, not letting anything stop him, doing what he believed is great work, and loving what he did.

Here's echoing Steve Jobs' message and wish for everyone as he ended his 2005 speech in Stanford, in a Post-it note from the thingsweforget blog: 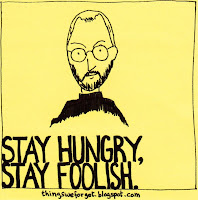